Everyone needs some end-of-the-year tax tips.  It's November already, and many Americans are trying to figure out ways to maximize their deductions and reduce their tax bills.
You're probably already familiar with a few common strategies, like donating money to charity. But there are many other potential tactics that may work for you too.
Here are 10 year-end tax tips for individuals:

Posted by Andrew Trimble at 9:16 AM No comments:

To prevent a meltdown, the New York Stock Exchange (NYSE) and the Nasdaq did not open for trading on Tuesday morning, September 11, 2001. When the American Airlines planes struck the towers within 30 minutes of one another, it was obvious that America was under attack.

The assumption that a coordinated terrorist assault by Islamic radicals had targeted some of the country's most iconic structures and institutions was confirmed some time later that morning when a plane hit the Pentagon, and a fourth hijacked plane bound for Washington, D.C., was brought down by passengers in Shanksville, PA.

Market Reaction
Anticipating market chaos, panic selling and a disastrous loss of value in the wake of the attacks, the NYSE and the Nasdaq remained closed until September 17, the longest shutdown since 1933. Moreover, many trading, brokerage and other financial firms had offices in the World Trade Center and were unable to function in the wake of the tragic loss of life and collapse of both towers.

On the first day of NYSE trading after 9/11, the market fell 684 points, setting a record for the biggest loss in exchange history for one trading day. At the close of trading that Friday, ending a week that saw the biggest losses in NYSE history, the Dow Jones was down almost 1,370 points, representing a loss of over 14%. The Standard and Poor's (S&P) index lost 11.6%. An estimated $1.4 trillion in value was lost in those five days of trading.

Major stock sell-offs hit the airline and insurance sectors as anticipated when trading resumed. Hardest hit were American Airlines and United Airlines, carriers whose planes were hijacked for the terrorist attacks.

The AftermathSteep declines hit the travel, tourism, hospitality, entertainment and financial services sectors, as a wave of temporary fear and uncertainty swept through the nation. Among the financial services giants with the steepest drops in share prices were Merrill Lynch which lost 11.5%, and Morgan Stanley which lost 13%.

Investing in Protection
Some sectors, however, prospered as a result of the attacks. Certain technology companies as well as defense and weaponry contractors saw prices for their shares increase substantially, anticipating a boost in government business as the country prepared for the long war on terror. Stock prices also spiked upward for communications and pharmaceutical firms

On the nation's options exchanges, including the Chicago Board Options Exchange (the world's largest), put and call volume increased correspondingly. Put options, which allow an investor to profit if a specific stock declines in price, were purchased in large numbers on airline, banking and insurance shares. Call options, which allow an investor to profit on stocks which go up in price, were purchased on defense and military related companies. In the short term, investors who had purchased these options made money.

The Bottom Line
The U.S. economy is legendary for its resilience, and in less than one month the Dow Jones, the Nasdaq and the S&P had regained its pre-9/11 price levels.


Portions reprinted courtesy of- http://www.investopedia.com/financial-edge/0911/how-september-11-affected-the-u.s.-stock-market.aspx
Posted by Andrew Trimble at 6:58 AM No comments:

Investing early and often are the vital components to long- term financial planning.

Commonly people ask themselves is it worth?  Am I saving enough?  When should I start?

American Funds, put together the below are article to detail some of the important answers to these questions...

Portions of Article Reprinted from-  https://americanfundsretirement.retire.americanfunds.com/planning/plans/benefits-of-starting-early.htm

Compound earnings can pay off

“Make money on your money” is the concept behind compounding. Compounding is when the money you earn from your investments is reinvested for the opportunity to earn even more.
By investing in a retirement plan, you can get even more benefit from the power of compounding with tax-deferral. Your retirement account has the potential to grow faster because the money you would have paid in taxes on earnings each year remains in the account and can earn additional money.
Keep in mind, though, that while compounding can make an impact over many years, there may be periods where your money won’t grow.
The earlier you start, the longer your money has the chance to compound. Use our investing calculator to find out how much your retirement dollars could grow, given the benefit of time.


Waiting may cost you

Waiting to start saving can have a major impact on your retirement.
For example, suppose you have a current salary of $30,000, receive 4% annual raises, and plan to retire in 30 years. You put 4% of your salary into a retirement plan each year and earn an 8% annual return.

Posted by Andrew Trimble at 6:51 AM No comments:


Exchange-traded funds, or ETFs, are similar to mutual funds in their purpose, but not in their application.  Both instruments bundle together securities in order to offer investors diversified portfolios. Anywhere fromr 100, or even up to 3,000 different securities can make up a fund, yet, the two investment types have significant applications and are used by investors to, oftentimes, accomplish different goals.


ETFs trade throughout the trading day, like a stock, while mutual funds trade only at the end of the day.   If you call your financial advisor and tell them I want to buy "XYZ" at 1230pm, the price that the fund will be purchased at will be the 4pm price, or price at the end of the day (NAV).  Most ETFs track to a particular index and therefore have lower operating expenses than actively managed mutual funds. Thus, ETFs can improve your rate of return on investments because of the lack of internal fees. In addition, ETFs have no investment minimums or sales loads, unlike traditional mutual funds, which have both. However, most indexed mutual funds will not have sales loads.

There are several other differences in ETF's and Mutual Funds, such as, how they redeem shares and the tax implications that these events cause.  ETF's are also a relatively newer investment vehicle than Mutual Funds, which can be found in nearly every 401k or profit-sharing plan in the marketplace.

In the end, both serve a purpose and can help individual investors achieve their financial goals.  Neither is necessarily better than the other, but rather when used in the ideal type of situation can have a better application for you.

Posted by Andrew Trimble at 7:28 AM No comments:

How do 529's work and what are my options for college savings?

Saving money for college (yours or your children’s) is a good thing, even when financial times are tough. Uncle Sam backs up that college-investment philosophy with a variety of savings programs that contain built-in tax incentives. Consider the following:

529's have become the most prominent vehicle in the college savings landscape.  Other options include Coverdell accounts, UTMA's or UGMA's, and traditional banking/ savings accounts such as CD's, or money markets.  Yet, none of the aforementioned have the flexibility of investment options and powerful benefit of potential tax-free growth that 529's have.

529's, Coverdell's and UTMA/ UGMA's are offered through a variety of investment companies and financial institutions, and marketed through financial advisors.  In some instances, employees can participate in 529's as part of their employer benefits program, but this depends on the state they are in, and their employer's benefits package.
Posted by Andrew Trimble at 7:38 AM No comments:

The purpose of this blog is to inform and educate people about some of the everyday practices in the Financial Services and Investment Industry.  Far too often I run into people who not only do not understand why they are investing in a certain product or account, but where and what they are investing in.  It is my desire for people to get a greater understanding of these concepts through monthly entries into this blog.

Some of the topics I will cover will include-

* Alphabet Soup-  Decoding SEP's, 529's, IRA's, 401k's and Roth's.  What are the distinct advantages of these accounts.
* What is this?-  Explaining Annuities, Mutual Funds, Stocks, ETF's, Variable Insurance, Municipal Bonds and options.
* Fact or Fiction-  Making sense of myths and expectations, and how to find value in a landscape that can be very misleading.
* How to-  Easiest ways to save for specific expenses using tax advantaged accounts.


I look forward to writing this blog and sharing some insight.  The goal is to make ones life easier.  Thank you for reading! 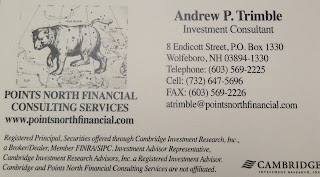 Pointsnorthfinancial.com is for informational purposes only. This website does not provide investment advice, nor is it an offer or solicitation of any kind to buy or sell any investment products. Rates and terms set on third-party websites are subject to change without notice. Please note that Pointsnorthfinancial.com has financial relationships with some of the merchants mentioned here. Pointsnorthfinancial.com may be compensated if consumers choose to utilize some of the links located throughout the content on this site and generate sales for the said merchant. I thank you for supporting this site. This is an independently-owned site and all opinions expressed are my own.

Posted by Andrew Trimble at 7:40 AM No comments: